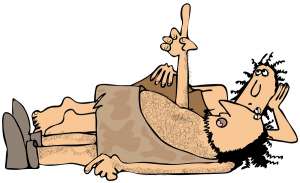 The fertility of hunter gatherers is an interesting topic because without any contraception our ancestors had to naturally adjust their birth rate to their circumstances of survival…like all animals do. On average a woman would have about 5 children in her life, and back then, more often than not, over half of these children would die before reaching reproductive age themselves. From a survival point of view, if only 2 made it to maturity on average there would be a stable population. On average a woman would conceive and deliver a baby every 4 years, starting at about 20 and finishing at 36 or earlier. Some longer inter-birth intervals were also quite common. Shorter intervals between births would be linked to higher mortality rates among children and mothers. Deliveries by mothers younger than 18 years old also resulted in a higher death rates. Looking at this distribution, it is quite clear that our optimal biological fertility occurs between 24 and 32 years old.

Other factors which affected fertility and birth rates in hunter gatherer times may inform us now about who we are. General health, nutrition, physical stressors and lactation are all tightly linked to the endocrine system and subsequently to fertility.   The body needs to do a “calculation” of the conditions to determine if a woman has the fitness to conceive and carry the baby to term and provide for it in the years to come without jeopardizing herself.

Fertility was linked to genetic fitness and general health, including the impact of infections and other diseases, which could affect the reproductive system. Nutrition is a critically important yet variable factor. The diets of hunter gatherers included a wide variety of seasonally available fruits and vegetables and tubers, grains, and so on. The supply of protein was likely very sporadic, and they foraged sources of meat, eggs, and even insects and frogs, etc.   A woman needed enough calories to have some excess fat reserves, an important prerequisite for normal hormonal cycling. Cortisol is released during starvation, and can strongly inhibit the menstrual cycle and fertility. This can be important for woman who are very slim in today’s world, since their bodies are still making decisions based on hunter gatherer times. In this case, gaining some weight can be beneficial for fertility . On the other hand, some woman who are overweight can have problems conceiving. There is a strong link between glucose intolerance, obesity, and infertility.   Polycystic Ovarian Syndrome is a common cause of infertility and is closely linked to type II diabetes and lack of ovulation.

The lactation period can also inhibit fertility.  Breastfeeding a baby for two or more years was typical for most hunter-gathering cultures . Suckling releases the hormone prolactin which ensures the production of milk. This hormone also inhibits the fertility cycle and allows the mother to focus her resources on her young baby.   A poorly nourished mother needs even higher levels of prolactin to produce milk during food shortages. More prolactin in produced when a hungry baby is suckling more frequently if the malnourished mother’s milk supply is poor – this in turn inhibits ovulation, and so on.   Once a baby has shifted to solid foods, some time follows until the fertility hormones are restored to the normal pre-pregnancy ranges. Following this cycle, it was usually not until after the child was 3 years old that hunter-gather women were able to conceive again.

Another factor affecting fertility is the level and type of physical exercise. Intense endurance type exercise can disrupt menstrual function the most. The physical effort required of hunter-gatherers (and early farmers too) was likely tremendous, at least from time to time. Not only would a woman be carrying a baby on her back or with her for at least 2 years as she foraged or travelled, but she also had the added challenge of physically foraging and carrying the gathered food or supplies as well! The effort could be compared to that of today`s athletes who do extreme endurance exercise like triathlons, who often stop menstruating and have inadequate levels of estrogen and progesterone needed for conception. Again, it comes back to levels of the chronic stress hormone cortisol being elevated. Today, some woman having difficulty conceiving because of emotional stress causing high cortisol levels. Perhaps a greater burden lies on the modern woman today more than ever, in terms of the stress of taking on a career outside the home and still being the primary caregiver to children. Taking it down a notch in our modern stressful world can help some woman conceive.

So in times past, a woman’s fertility was closely aligned to the risk factors and opportunities that predicted the outcome of conception. Today too, we are no different. A woman needs to regulate her diet, be physically fit but not over-train, and give enough time between babies, lactating or not, so that her body can recover to full form.